Who needs an introduction?! I’m just going to dive in to the main point of this post:
Suggesting that a potential victim change his/her behavior is not victim blaming. 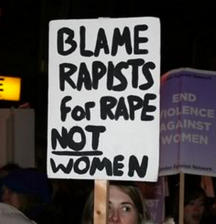 If you thought “well, yea… duh”, then congratulations. You have not run into the more inane side of those who call themselves “social justice warriors” #SJW! Many of them are under the impression that by giving potential victims advice about how not to become a victim, you are actually blaming them for being victimized.

I’ve had/read several discussions with many self-proclaimed SJWs who seem to have absolutely no idea how to listen during a conversation. To them, even the mere suggestion that someone might be able to modify their behavior in order to not become the victim of a crime is morally reprehensible.

This idealism promoted by these social justice warriors is unrealistic, irresponsible and potentially harmful.

Would I like to live in a world where I can leave my car unlocked with a laptop on the seat and not have to worry about it being stolen? Of course I would. But the fact of reality is that we do not live in that kind of world. So, because I don’t want my laptop to be stolen, I bring it with me and I don’t leave it in my car.
Most of the time, SJWs suggest that the real solution to problems like this is education of the potential criminal. And I agree, education would likely solve some of the problems, especially when it comes to men who don’t understand consent. For this reason, I am in favor of this approach.

Merely suggesting that we educate people will not alleviate society of rapists, thieves and murderers. So what can we do? We, as potential victims of these crimes, can modify our behavior in an attempt to not become a victim of someone who does something wrong, knowing that it is wrong.

We may not be able to change the behavior of those who know that X is wrong and choose to do it anyway, but we CAN change the environment in a way that makes X impossible.

So… should we educate potential criminals or warn potential victims?
There is no reason we cannot do both.

Dear social justice warriors,
I implore you to have a more accurate view of reality. Your idealistic approach to issues like these are harmful. We have to live in the real world; a world where people knowingly do morally reprehensible things. If you really want to prevent criminal activity, we must do more than merely educate potential criminals.
I would also greatly appreciate it if you didn’t assume everyone was blaming the victim when they suggest a modification of behavior on behalf of potential victims. While some victim blaming certainly does exist, the average person who says “aww, i’m sorry your GPS was stolen, you should have locked your car” is not blaming the victim. They are offering a genuine suggestion to help prevent this behavior from happening in the future. If their suggestion isn’t based off of ‘statistical data’ (like when they suggest women dress modestly to avoid being raped), they may be ignorant/misinformed, but they are still not blaming the victim. Feel free to correct them, but do so in a way that doesn’t involve throwing knives, name-calling and breathing fire.

Thanks for reading!
Leave a thought in the comments!

ps. I do not think it is ok to retroactively blame the victim for not taking the proper precautions.
pps. I do not think it is reasonable for a judge to let a rapist go free because the victim was drunk.
ppps. If you think I am ok with any victim blaming at all, you’re wrong. I don’t hate women. I am not a misogynist. There’s no way I can predict how people will misrepresent me, so I guess I’ll just have to hope that people will treat me like a reasonable person, even if they disagree.